My thoughts from the recent #devopsdays conference in London; notes, inspiration, todos, ahas, and OMGs.

(Since my handwriting was so poor on the first day and my name badge was illegible, this was the badge for day #2!)

Wow. There’s a lot to learn about this whole DevOps movement, but I actually feel that I can contribute to it having a pretty broad range of experience; I’m mainly development, but over the past decade or so have turned my hand to basic sysadmin-ing, DBA-ing, QA-ing, BA-ing, dev managing – almost all of the areas that need to be covered. I like to think of myself and a catalyst for implementation 🙂

I had initially been concerned that I lacked depth in skills like virtualisation and automation, but I’ve realise that those systems like Puppet, Chef, and Vagrant are potential solutions to a problem of configuration management (CM) and automation. Understanding the need for these tools is half the battle; being a specialist in them isn’t completely necessary, but an understanding to a level of basic implementation would be useful.

I’m already enrolled on a bunch of puppet webinars so will be getting stuck into that more soon.

Even though I’m pretty new to this, chatting with some key people did validate my thoughts that people shouldn’t be referring to “devops” as a person or a role in their presentations instead of an approach/framework/culture.

What happened at #devopsdays?

After being drawn in to the Basho booth by a raspberrypi/arduino/riak mars-rover-esque robot and chatting with John Clapham, who I didn’t realise was about to do the second presentation of the day (!), I end up deciding to sit right at the front (like a swot).

This turned out to be a great move as I ended up chatting with the organisers and even one of the founders of the DevOps movement, Gene Kim. Really nice guy, looks exactly like his twitter avatar (unlike some of us.. ahem..), and he even took a picture of the two of us together and let me know how to get onto the book review group for the long awaited DevOps Cookbook – bloody nice chap.

Chris Little, from BMC, is a really interesting guy to talk to as well – gave me a great overview of the background to DevOps, its “founders”, and helped me understand both its role in a company and in the future of the industry.

A pic Chris took from the stage 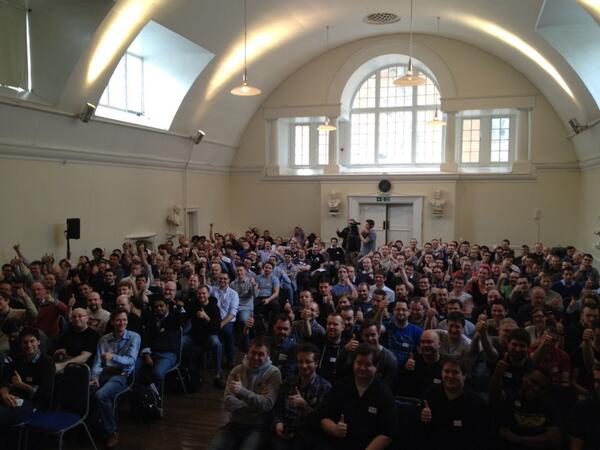 Each day there were four main presentations to start with, then some “ignite” talks.

I’m not going to try to go into the details of these presentations as 1) I’m lazy, 2) I tried to take notes on my phone and the battery died, and 3) other people have done it much better than I would have anyway!

Essentially, I found several of the presentations difficult to really grasp as I felt I was lacking a frame of reference. Perhaps this was just me not having enough of a Ops background, but I felt that the presentations could have benefited from a slide or two at the start laying the foundation for the remainder of the talk.

I was very glad to see at least one full presentation being completely non-technical, and instead focussing on the culture side of DevOps.

The afternoon of each day was put aside to OpenSpaces: everyone has the opportunity to propose a discussion topic, pop it on a post-it, people who want to vote can take a marker and add a dot on the post-its that they’re interested in. Those with the most dots get allocated a room and a time, and the discussions commence.

I initially thought this was a bit of a cop-out: I paid to attend a conference and half of it is the other people who paid talking to each other?! Rip off!

However, the discussions that I chose to attend helped me understand much more about monitoring, logging, database CI, puppet/chef/CF Engine/vagrant basics than I could have got from the main presentations, so I’m a convert.

DevOps is an exciting opportunity to technically innovate around CI, automation, delivery pipelines etc, and also to work with the business to introduce concepts like Impact Mapping.

This is where I’ll be focussing my professional efforts for the near future. I think there’s a lot of potential to help relieve stress on development teams and operations teams and relieve frustration from the business teams that define the work.